Get fresh music recommendations delivered to your inbox every Friday.
We've updated our Terms of Use. You can review the changes here.

All Is Quiet At The Ancient Theatre 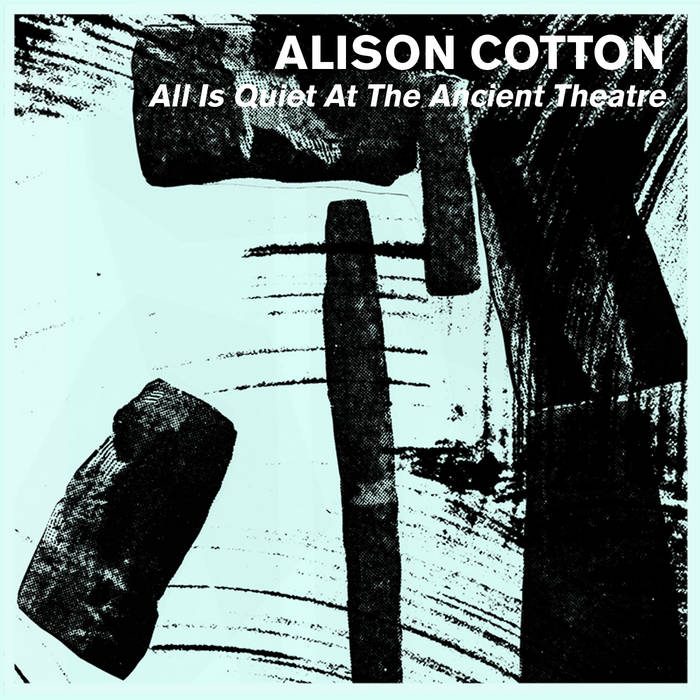 Deadpixie Beautiful, as are The Left Outsides and Trimdon Grange Explosion

Zeruffu All is quiet in the ancient theater of eternal music.
RIP Tony Conrad.

All cassettes now sold out, but a LIMITED VINYL REISSUE, with artwork by Luke Drozd, has been made courtesy of Cardinal Fuzz/Feeding Tube. Purchase this LP direct from the artist at: theleftoutsides.bandcamp.com/album/all-is-quiet-at-the-ancient-theatre

Bloxham Tapes is proud to announce its seventh release, 'All Is Quiet At The Ancient Theatre' by ALISON COTTON.

For devotees of contemporary psychedelic folk and viola trance-out, ALISON COTTON requires little introduction. She is half of acclaimed songwriting partnership The Left Outsides, a member of The Trimdon Grange Explosion, and occasional contributor to the United Bible Studies collective. Her breathtaking collaborative cassette with Plinth’s Michael Tanner points the way to this, her debut solo release on Bloxham Tapes.

A solo project in the truest sense, viola, recorder, percussion and mesmerising voice are the instruments in Alison’s orchestra as she takes the stage at the Ancient Theatre. Rich sound breaks the stillness. Drone dreams seep through sepia photographs. Nothing here now but the improvised recordings, captured on two sides of cassette tape.

We are delighted to present another side of her work. Out of time. Timeless. All is quiet in the ancient theatre of eternal music.

"Although this is music feels irrevocably for the countryside, I'd really recommend listening to 'All Is Quiet At The Ancient Theatre' on your Walkman while standing in the middle of a busy city centre. The power of this music is simply awe-inspiring. When Alison Cotton plays, the world stands still… Magnificent work, and it must be said, beautifully presented by the fantastic Bloxham Tapes (their entire back catalogue comes highly recommended)…" TRISTAN BATH, SPOOLS OUT: JULY 2018, THE QUIETUS

"Alison Cotton of avant folk duo The Left Outsides creates a psychedelic pagan folk ritual with her viola, recorder, percussion and ghostly voice on 'All Is Quiet At The Ancient Theatre'. Slowing things down to a droning pace, Cotton seems to summon up mystical powers through her eerie Clannad-ish chants on 'The Bells of St Agnes'. And like Laura Cannell, she finds similar tones of drone within her string music by allowing space for the dragged out notes to echo and buzz on 'The Last Sense To Leave Us'. Her choral vocal pipes in with a numbing effect, floating upfront and back into the shadows again on the five tracks, which were all improvised… Better than any mindfulness app for cleansing the brainwaves and stilling the souls of the godless for hald an hour or so…" CLAIRE SAWERS, THE WIRE

"The opening, title track is built around a repeated, six-note viola phrase that seems to echo around an amphitheatre of stone. Heat haze rises from empty seats, but the music is playing from a time when the theatre was packed. A drone builds and the falling phrase emerges haltingly, as though calling out for the first time in centuries. As the viola sings, a chorus of soft, layered voices, percussion and recorder swells in the background and soon a cast is on stage, performing a forgotten ritual. If any piece of music can awaken a lost time, this is surely it." TOM BOLTON, THE QUIETUS

"Make no mistake this is a work of great depth and passion and one which reveals more of its irresistibly melancholic charm with each successive listen. From those chilly fields at dawn to the blasted heaths of existence and all points above and below ground this engulfs you like a creeping vine. Thankfully I’m still hopelessly lost in the dense and tangled thicket of sound and likely to be for quite a while. Rustle among yourselves." TERRASCOPE

"The only thing that does a better job of crafting a vivid environment than the title of Alison Cotton’s new album is the music itself. 'All Is Quiet at the Ancient Theatre' is a mysterious, spacious album; one of the first things I noticed is the cavernous, reverb-filled production, which frames the sounds throughout in much the same way as I imagine a high-ceilinged, shadowy, dusty chapel would. Cotton’s drones, played on viola, recorder, and her own voice, ring out through the darkness, coexisting with the weighty silence as they materialize and dissipate… 'All Is Quiet at the Ancient Theatre' is a fantastic solo effort…" NOISE NOT MUSIC

"Something so beautiful and powerful that it took my breath away… With this solo outing via the veritable Bloxham Tapes, Alison Cotton has produced something that transcends any notions of genres and pigeonholing." RATS IN THE WALLS

All compositions by ALISON COTTON, 2018

Mastering by Galloway at Magnetic Domains.

Bandcamp Daily  your guide to the world of Bandcamp